The first installment of ‘The Hypocrisy of White Supremacy’ touched on the hypocrisy that past presidents, first-wave feminists, and white moderates showed in their dealings with black people and why white supremacy, as a concept, is a falsehood. After writing that, my mind was drawn to the sheer access black people historically had into the lives of white people, despite being seen as subhuman. Also, how European colonization is ultimately the root of the “anti-diversification” movement that the alt-right peddles. 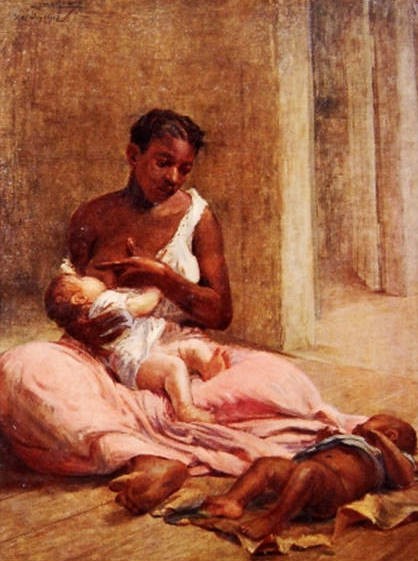 The services ‘provided’ by black people via enslavement have always been an integral part of the progression of white societies around the globe. Black slavery is what made America as prosperous as it is today. Four hundred years of free labor will do that. These services, however, move past the manual labors of carpentry, building, and masonry.

Slaves were intimately involved in the lives of their masters and their master’s families. It is peculiar that enslaved black people were always seen as lesser than white masters, yet, played such an essential role in their personal lives. Slaves were dehumanized beyond belief, of course, but the vast plantations of the south could not run without a multitude of enslaved black people at the ready performing a myriad of household and field tasks.

Devane-Johnson held focus groups asking black women, ranging in age from 18 to 89 years old, on their thoughts on breastfeeding. She was performing research for a doctoral degree at the UNC-Chapel Hill School of Nursing. Devane-Johnson mentioned in her report:

“A lot of slave babies died during slavery because they weren’t breastfed. They were fed concoctions of dirty water and cows milk. Meanwhile, those children’s mothers were giving white children their milk.”

Written below is a firsthand account from former slave Ellen Betts recounting life as a wet nurse in St. Mary’s Parish, Louisiana. This excerpt is from the book, ‘Bullwhip Days — The Slaves remember’ by James Mellon. You can find more information on Ms. Betts’ life at the Library of Congress website.

Read the rest of this piece on Medium.com!

On April 18, 2019, a video was released of Sergeant Greg LaCerra and Officer Christopher Krickovich pepper spraying and punching 15-year-old Delucca Rolle in the face.

According to a witness of the event, more students than usual had come to a McDonald’s near J.P. Taravella High School because “somebody was going to get jumped.” Records from the Broward County Sheriff’s Office showed that police had been called to said McDonald’s an astounding 85 times since August of 2018. Vandalism, trespassing, and “suspicious people” were the most common reasons why they were called.

According to other students of J.P. Taravella, two fights occurred at the school earlier in the day of the April 18th incident. This is an explanation why the police showed up in their best robocop gear to “deal with” hyped up teenagers. An unnamed teen was involved in a fight there a day earlier. Delucca was assaulted and arrested after reaching to pick up the aforementioned teen’s phone. According to Officer Krickovich, Delucca disobeyed Sgt. LaCerra’s order to stay away and then had an “aggressive stance” toward both officers.

Krickovich wrote these things in his report:

“Again, the three of us were outnumbered by a large group of students who were yelling threats and surrounding us.”

“I had to act quickly fearing I would get struck or have a student potentially grab weapons off of my belt or vest.”

[Referring to punching Delucca’s head] “as a distractionary technique” [to free his right hand in order to cuff him].

“The technique was successful and I was able to place him into handcuffs without further incident.”

The two deputies were later suspended in full after initially being relieved of duty by Broward Sheriff Gregory Tony. Both LaCerra and Krickovich are charged with using excessive force during the arrest. The cases are still pending.

Obviously, this was an egregious miscarriage of “the law.” However, that wasn’t what I was focused on. My eyes turned to the comments people were leaving on the video and articles about the altercation.

Read the rest of this piece on Medium.com!