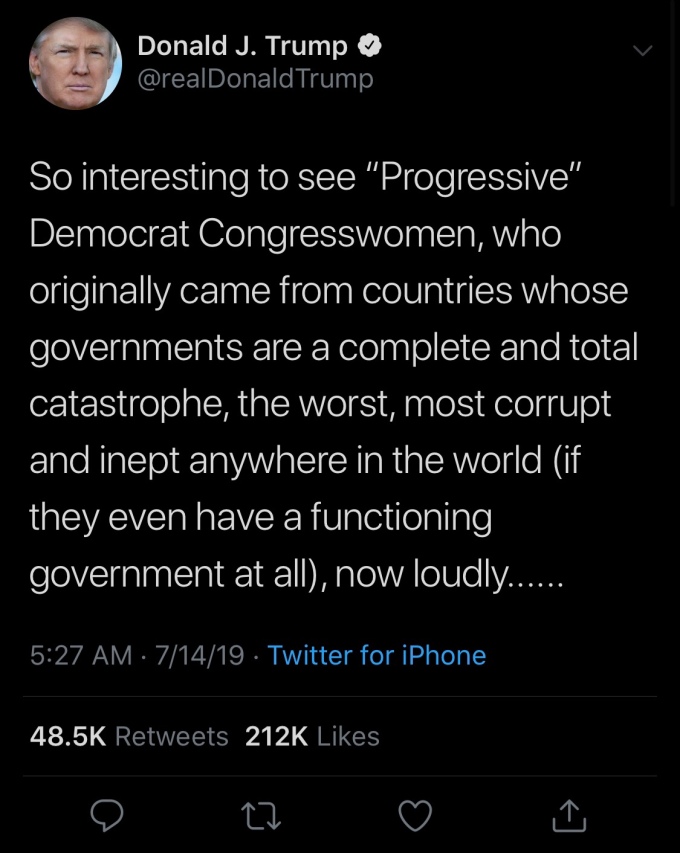 My question is…are y’all really surprised? I mean come on a racist saying… racist things is confusing?  Don’t get me wrong; what he said was abhorrent and should be criticized heavily (as usual). But there should be no confusion that the current president of the United States of America is an open racist.  He revels in it.  With that being said, he’s not the first racist president America has had, of course. But damn it is crazy witnessing a president in 2019 say some shit you’d hear at a segregated lunch counter in 1956.

The American government has a history of “othering” certain groups of people as scapegoats for economic despair, societal changes, you name it.  This is no different.  There’s also an air of “We let you in, how dare you complain?” when anyone that isn’t a white American criticizes America. It doesn’t matter whether or not the person was a US citizen, only the color matters.

I do not know where this collective amnesia about Trump being a racist came from but allow me to refresh your memory.  We already all know about racist rhetoric he’s used over his presidency, so I’m not even going to bother touching on that.

Donald Trump was racist in 2011 when he questioned the citizenship of Barack Obama and repeatedly did so years later saying “When I questioned he gave whatever it was he gave. I’m not exactly sure what he gave but he gave something called a birth certificate. I don’t know if it was or not.”

Donald Trump was racist in 1993 when he went before the House Subcommittee on Native American Affairs of the Committee on Natural Resources and had yet another racist exchange with REP. GEORGE MILLER (D-CALIF).  Saying “They don’t look Indian”.

REP. GEORGE MILLER (D-CALIF): Is this you, discussing Indian blood: “We’re going to judge people by whether they have Indian blood whether they’re qualified to run a casino or not?”

And a lot of people are laughing at it. And you’re telling me how tough it is and how rough it is to get approved. Well, you go up to Connecticut and you look. Now, they don’t look like Indians to me, sir.

MILLER: And that was the test for whether people could go into business, or not go into business. Whether they could get a bank loan. You’re too black, you’re not black enough.

TRUMP: I want to find out. … Well, then why don’t you — you’re approving for Indian. Why don’t you approve it for everybody then, sir?

TRUMP: If your case is non-discriminatory, why don’t you approve for everybody? You’re saying only Indians — wait a minute, sir.

Donald Trump was racist in 1989 when he called for the death penalty be brought back to punish the Central Park 5 boys after they were falsely accused of rape.

Donald Trump was racist in 1973 when he and his father Fred Trump were being sued by the Justice Department for racial discrimination.  They weren’t allowing black tenants to rent out any of his apartment buildings. 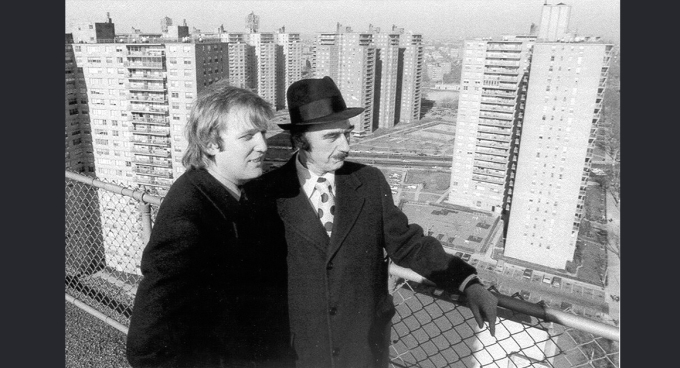 And (shocker, you’ll never guess what I’m about to say) Donald Trump is still racist in 2019.

Donald Trump has been a racist, misogynist scam artist since before I was born.  This is not new information.

Oh and I’ll say it since Nancy Pelosi and other ‘establishment’ democrats won’t: RACISM IS AN IMPEACHABLE OFFENSE.

“Well, why is racism an impeachable offense, Soler?”

Racism an impeachable offense because it affects how you govern.  It affects your empathy.  It affects what problems in what communities are deemed worth fixing. Racism allows you to dehumanize with no conscious.  It is understood that Donald Trump is a racist and that his racism affects the way he governs. We’ve seen that with the concentration camps at our southern border and the Muslim Ban.  It also affects who he sees as “legitimate” Americans as seen via his tweets.

“When someone shows you who they are, believe them the first time.” – Maya Angelou.