Anytime anyone utters his name, I have one of four reactions.

I mean he’s a racist, misogynistic, dim-witted, xenophobic, hypocritical asshole but ya know…AT LEAST HE TELLS IT LIKE IT IS…right?

Here are 11 reasons why you’re apart of the basket of deplorables for supporting/liking Donald Trump:

Reason 1.) He mocked a disabled reporter.

*cringe* This should really be the only reason.  I wish this was a joke, I wish I had read this on The Onion or something but nope.  This is 100% real and 500% disgusting.  The reporter’s name is Serge Kovaleski.  Kovaleski has arthrogryposis which limits the movements in his joints.  It is obvious and clear that Trump was mocking Kovaleski’s disability.  So Trump is officially an ableist piece of garbage.

I can already hear you through the screen.  “Soler, where’s your proof!?”  “You made this up because you hate Trump!” Um…I wish I was making this up but unfortunately, it happened.  After a doctor Ivana recommended to Trump apparently butchered his scalp reduction surgery, he ripped out chunks of her hair and sexually assaulted her.  You want to know what Trump’s lawyer said about it when the allegations resurfaced?  “You can’t rape your spouse.”  Ivana later recanted her statement specifically about rape saying “During a deposition given by me in connection with my matrimonial case, I stated that my husband had raped me.” “I referred to this as a ‘rape,’ but I do not want my words to be interpreted in a literal or criminal sense.”   But she still stated that she felt violated.

Reason 3.) He LITERALLY called the entirety of Mexican people ‘rapists’.

Reason 4.) He’s the epitome of a misogynist.

I just…You cannot make this crap up.   Just some things he’s said about women:

The list goes on and on.  And do not give me that “OH he has daughters!” “He loves his wife!” “He ran Miss Universe!” because he literally said he’d date his daughter. So hush.

Reason 5.) He does NOT tell the truth.

Donald Trump has lied about so many things, I can’t even list them all so I’ll just provide the links.  (I’ll give you a freebie, he lied in the debate about NOT supporting the Iraq War.) I swear all this man does is lie and recant his lies.

Donald Trump maintained that Obama WAS NOT an American citizen up until fairly recently.  He made it seem like only HE could prove the validity of Obama’s birth certificate even after Obama released it.  He was just SO proud that HE was the one “that got Obama to produce his birth certificate“.  Jesus.

Reason 7.) He thinks global warming is a myth.

Not only does Trump think global warming is a myth but he thinks is a myth made up by the Chinese?  I just… I don’t understand.

Reason 8.) He has an AWFUL temperament.

During a rally of his, he said he’d like to “punch him in the face” and that folks like that “would be carried out in a stretcher” referring to a protester.  He’s repeatedly reacted to others rashly on Twitter.  He’s even said that he’d pay the legal fees for someone willing to punch someone for beginning to throw a tomato at one of his speeches.  But apparently HILLARY is the one who doesn’t have the temperament to be president. Do we really want someone who rants about a former Miss Universe’s sex tape at 2 in the morning granted access to nuclear launch codes?

Reason 9.) He openly admitted to wanting to commit WAR crimes.

He said that he’d “take out the wives” of terrorists if they knew an attack was going to happen.  He’d also said, “you have to take out their families” in a radio interview so…yikes. (This is a war crime BTW.)

…He knows that “Muslims” are apart of religion, not a race of people…right? Welp, apparently not.  I think he just meant “Keep all those scary brown people away from White America but okay.

Reason 11.) He said women who receive abortions should be “punished”.

I DO NOT UNDERSTAND WHY YOU WOULD BE VOTING FOR THIS DEEP FRIED, CRUSTY, IGNORANT, ORANGE, SACK OF BREATHING GARBAGE.

You know what’s scary about all this?  All this information was right there, out in the open.  Nothing was kept under lock and key at Fort Knox.  If a 17-year-old who can’t even vote yet (AKA: me) can find out all this information about a presidential candidate YOU plan to vote for (and knew nothing of the things listed above) then there’s a HUGE problem. This information is not hidden; therefore, people are either choosing to ignore it OR aren’t seeking it out in the first place.

Look if you want someone to be president of the United States; you have GOT to look at what type of person they are.  Now I’m not fond of how elections have seemed to become “Who’s The Next Prom King and Queen.”  Everything is about who is the most likable versus who will actually be best for the country.  Just because I don’t want the presidential race to become a popularity contest doesn’t mean I’m willing to ignore the person’s character.  I’m not saying that personality shouldn’t be a factor, but it should be minuscule compared to the candidate’s policies.

I’m also NOT a Hillary groupie.  I was “Feeling the Bern” all the way, but now that he’s not a viable candidate, she has my support.  I am in no way saying that she is perfect, but she has not done or said half of the ignorant, twisted things that Trump has said in the past.  If Hillary mocked a disabled reporter, YOU WOULD NEVER HEAR THE END OF IT.  They’d be playing the footage on a loop over on Fox & CNN, but for some reason, Trump has a pass.  He says so many outrageous things that when he says something that ANY other politician would be politically murdered for, people overlook it just because “Its Trump.

If you ask a Trump supporter to explain to you why they support Trump WITHOUT saying:

“He tells the truth.”

“He’s not a crooked politician.” 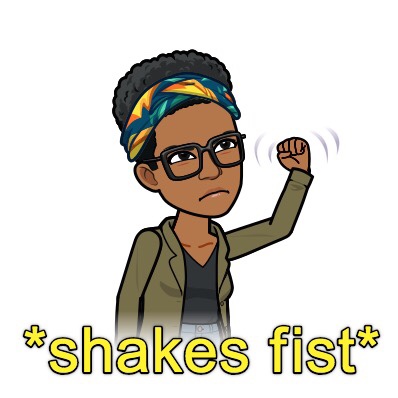 A LOT of Trump supporters are extremely ill-informed.  They’ve fallen victim to the whole “blue collar billionaire” thing because that’s what Trump’s people keep putting out there but in actuality, he was born into money.  They think just because he speaks “like the people” and he doesn’t speak like the “common politician” he’s automatically the better option.  This dude has a 6th-grade reading level.  He isn’t ready to LEAD anyone.  Running a business you inherited is monumentally different than running an entire country as the arguably most important person among the first world countries.  Come on people. DO BETTER.  This is a man who says not paying taxes makes him smart. THIS MAN SUPPORTS STOP AND FRISK!!!  (Everyone knows Stop & Frisk targets Black and Hispanic people, is unconstitutional and is just racist as hell.)  Why do y’all want him as your president???? Why????????

Donald Trump is preying on America’s fears, I get that.  However, he is also giving the racist, sexist, xenophobic trash of America an outlet to express their hatred under the guise of “making America great again”.  I mean the KKK/David Duke endorsed Trump and he denied knowing anything about “white supremacy” but as usual when dealing with Trump, that was a lie.  Trump has the white supremacist vote on lock. Some of his supporters just hear someone that doesn’t sound like a politician and they automatically latch onto them.  It’s just a hot ass mess.

In conclusion, DT is trash and so are his supporters.

3 thoughts on “Trump: How In The Hell Has He Gotten This Far?”